Ben Lavoie graduated from The Gordon Institute of Engineering Leadership (GIEL) in 2013, pairing his Graduate Certificate in Engineering Leadership with a Master of Science in Energy Systems. While pursuing his MS at Northeastern University, Ben had a desire to grow his abilities to eventually assume a leadership role. Initially comparing The Gordon Institute with an MBA, Lavoie chose to pursue The Gordon program because of its fundamental ties between technical and leadership principles. “I was considering getting an MBA but preferred a more technical path as opposed to a focus solely on business administration. I started looking into The Gordon Institute and I became immediately interested because it seemed like it provided a unique opportunity, different than an MBA, in the sense that it offers the chance to grow leadership skills while maintaining a focus on technical engineering principles. This aligned well with what I was looking for. Looking back, I’m very glad that I decided to complete the program. The impact GIEL has had on my life and my career has far exceeded initial expectations.”

After about seven years working for lithium-ion battery manufacturers, Lavoie joined Ameresco in 2015 and has since grown in his role as a Project Development Engineer. At Ameresco, Lavoie is responsible for growing and leading a technical team focused on energy storage projects with Federal Government agencies and serves as Ameresco’s resident Subject Matter Expert in battery storage. “I was able to immediately apply what I learned in the Program to practice technical leadership principles on a daily basis. Improving my skills such as situational awareness, how to be effective in a dynamic technical business environment, communication, and understanding the principles and capabilities of effective leadership gave me the confidence to grow as a leader. These skills helped me quickly acclimate to the Ameresco team and grow my influence in my role. I don’t think I would have ever developed that from an MBA program.”
As Lavoie’s team developed through the months following his promotion, it became clear there was a need for additional capacity. “We had an idea for a project that showed promise to add value to the company but wasn’t at the top of the priority list. This created an opportunity to add someone to our team who could lead this effort.” As a graduate of The Gordon Institute of Engineering Leadership, Ben knew the value a Gordon Fellow Candidate could bring to the team. “I advocated to take on a Gordon Fellow Candidate. I thought about our company objective, what kind of Challenge Project could be developed and how it would add value to the company. It was important for me to formulate a strong Challenge Project in order to foster a good relationship with The Gordon Institute; something that was beneficial to the student and to Ameresco.” Once Ben formulated a Challenge Project concept and consulted with The Gordon Institute, he was introduced to Krystian Nowak, a Gordon Fellow Candidate pursuing a Master of Science in Energy Systems in conjunction with a Graduate Certificate in Engineering Leadership. “When we met Krystian, it was immediately apparent that he could contribute a great deal to our team. He’s a team member that we are lucky to have found. My company leadership has been very pleased with Krystian’s work and with our relationship with The Gordon Program. We’re thrilled to have recently hired Krystian in a full-time capacity, so he’ll be staying on with us after completing The Gordon Program. We’ve benefited a great deal from the new relationship with The Gordon Institute and hope to continue to grow the Gordon-Ameresco relationship in the future.”

Another important takeaway from Ben’s GIEL experience is recognizing the importance of a work-life balance. Lavoie has developed a passion for running and completed three consecutive Boston Marathons, raising funds for the Claudia Adams Barr program at the Dana-Farber Cancer Institute in Boston. “Maintaining a work-life balance is crucial and I believe allows you to be more effective in the various aspects of life. For me, running offers time to get away, reflect, and clear my thoughts – which often help me take a better perspective into my work environment. Being a part of the Dana-Farber Marathon Challenge community has been one of the most rewarding aspects of my life. Running 30-40 miles per week for 5 months while training and working a full-time job is not always easy. I certainly have benefited from some of the skills learned from The Gordon Program to help balance it all and be effective in both aspects of my life. It’s important to consider short-term objectives in perspective with the long-term vision, work hard, and have perseverance and confidence in yourself to get through the rough patches that will inevitably come along. Those skills are very relevant to running but are equally important to be an effective leader.” 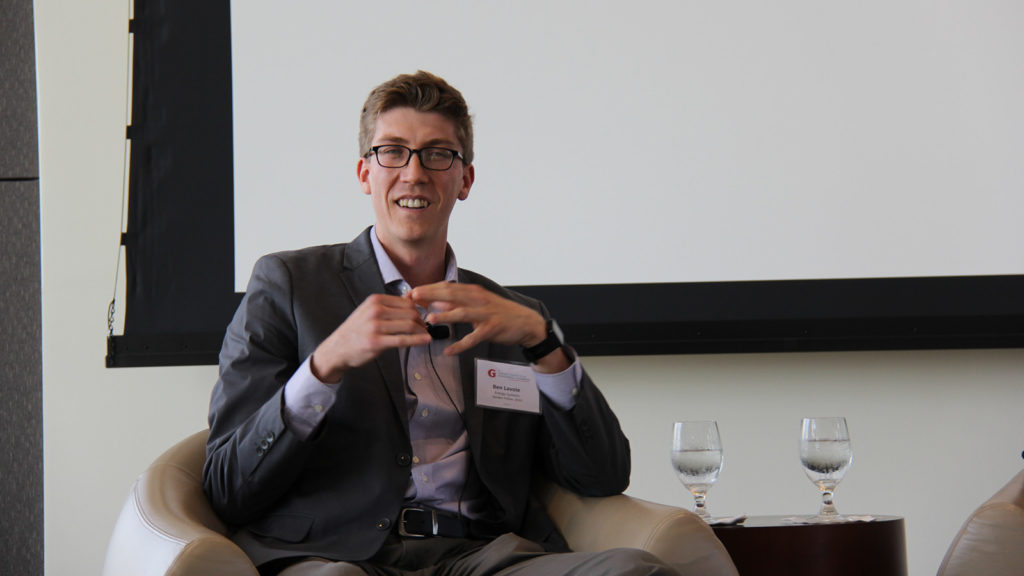 Almost five years after graduating, Ben remains a strong advocate of The Gordon Institute and continues to fine-tune the leadership skills he developed through the Program’s coursework. “For me, being an Industry Sponsor Advocate after having graduated from The Gordon Institute myself has really put the Program in a new perspective. Supporting Krystian in his Challenge Project has allowed me to continue to learn and grow as a leader, leveraging the education and insight I gained from completing The Gordon Program. I’ve found it to be most rewarding when you can guide others and see them succeed in their own roles. Those experiences have turned out to be far more beneficial than any individual experiences or accomplishments, and I look forward to our team continuing to grow and succeed in the future.”