We recently had the pleasure of catching up with Diego Rojas Arancibia, a Fulbright Scholar from Bolivia who completed the Gordon Engineering Leadership Program in August of 2017. Since completing the Gordon Program, Diego has won a prestigious engineering competition and co-founded a nonprofit organization.

Before pursuing his MS in Energy Systems at Northeastern University, Diego spent three years working in the industry; first as Process Optimization Manager in PFM, a medical company, and then as an engineering analyst at AB-Inbev in Bolivia. “I learned many things about engineering but I wanted to learn more about how to lead a big company such as AB-Inbev so that’s why I wanted to complete the Gordon Program, I wanted to be able to work at a company and at the same time know how the company is performing and how it operates; so that’s why I decided the Gordon Program was the perfect combination along with my masters to be able to achieve my goals.”

As a Gordon candidate, every student in the program must complete an individual, self-lead challenge project over the course of the academic year with the sponsorship of a company within their prospective industry. “I knew it was going to be challenging but that’s what I wanted, that’s why I did the Gordon Program. For my challenge project, I designed, built and implemented a system that enables lithium-ion phosphate batteries to communicate with a cloud service. These batteries are used to shave the electricity peak demand of our customers. Electricity is usually more expensive during peak hours, so the batteries store electricity when it is cheap and discharge it when electricity is expensive, thus saving money. Having the batteries connected to the cloud allows our customers to operate them remotely and without human intervention. This connection also allows for performance monitoring and faster troubleshooting. It was difficult because Spark Plug Power was just a three-person startup; I was one of the only engineers in the company, and I didn’t have much technical support so I had to learn a lot on my own, with the support of senior leadership I ended up not only completing my challenge project but becoming the chief engineer at Spark Plug Power. Sean Becker, the founder, started to trust more in my capabilities and gave me additional responsibilities. I accomplished more than I originally planned in the beginning.

After completing the Gordon Program, Diego applied what he learned to new challenges. “With the Gordon Program, I realized that I could do whatever I wanted to do as long as I was truly committed. I learned about a contest hosted by an Italian company, looking for top engineering students in Massachusetts. The contest was about developing a new project for the company, Piusi, the world leaders in fuel nozzles and dispensers.” Diego was one of more than one hundred applicants who applied for the “Italian Innovation Engineering Contest.” After interviewing, Diego was selected as one of ten finalists and given three months to create a centerpiece for a new product. “It was perfect timing for me because I had just graduated the Gordon Institute and the project I decided to work on for the competition was similar to the challenge project that I had worked on during my time at the Gordon Institute.” 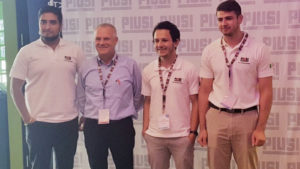 “The system I presented to Piusi is a combination of two devices. One device to monitor fuel dispensers and a second one to monitor car performance. For a customer who owns a car fleet, it is important to know how much fuel their cars are consuming, how much distance they are traveling and if the fuel from the dispenser is being correctly fueled to the cars, among other performance indicators. The devices I designed will allow Piusi´s customers to have all of the data on their cellphones, thus to have better control of their assets.” After three months, Diego was tasked with presenting his project in front of six Piusi executives who came from Italy just for the presentation. Diego accredits a large part of his project success and ability to present to his time spent at the Gordon Program. “After I finished giving my presentation to Piusi, I knew I was going to win, I watched all of the other candidate’s presentations and I knew that mine was totally different, unique in its delivery. A big part of being a leader is how you tell a story. The company executives told me my presentation was more like a TED Talk and not just a typical engineering presentation.

Diego’s first-place win included a three-thousand-dollar scholarship and an all-inclusive internship at Piusi’s headquarters located in Italy once Diego graduates with his MS in Engineering Systems in the Spring of 2018.

When asked where he finds such a strong source of motivation, Diego explains: “I didn’t only learn from professors [at the Gordon Institute], but I also learned from my classmates. I told myself ‘I need to do more’ and I can do that, it’s not that I don’t have enough time; if you want it, you can do it.” 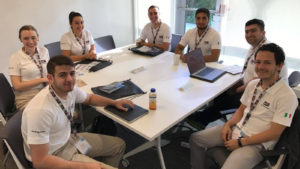 Diego’s new-found motivation has served him well considering he not only won an international engineering competition over the course of the summer but also cofounded, alongside another Bolivian Fulbright Scholar Luis Ortiz, a nonprofit organization in his home country of Bolivia known as “Tu Beca Bolivia” or “Wake up Bolivia.” “Our objective is to get more people from my country to get scholarships abroad. We found that there are more than two hundred different scholarships to assist Bolivian people in getting a master’s degree abroad and they just don’t know about it or they think they are not good enough. In order to remedy this, we have established a team of forty Bolivian scholars in more than twelve different countries around the world and we are connecting these scholars with aspiring students via personalized tutoring.” Tu Beca Bolivia may still be in its infancy but the nonprofit has already received almost 900 applications from aspiring students and more than thirteen thousand likes on Facebook.

Diego’s passion for his home country of Bolivia is apparent in both his personal and professional life. When asked about his long term plan and how his leadership skills would allow him to achieve his goals, he has aspirations to continue to build both his career and philanthropy in Bolivia. “I learned, through the Gordon Program, that being a leader means love, to love your team and to really care about them. I understood that the only way to be a good leader, the kind the world and my country need, is if I do everything with honesty. Being a leader doesn’t mean just making a profit and making your company grow, but also taking care of your team and making them feel as good as you feel in the company.”